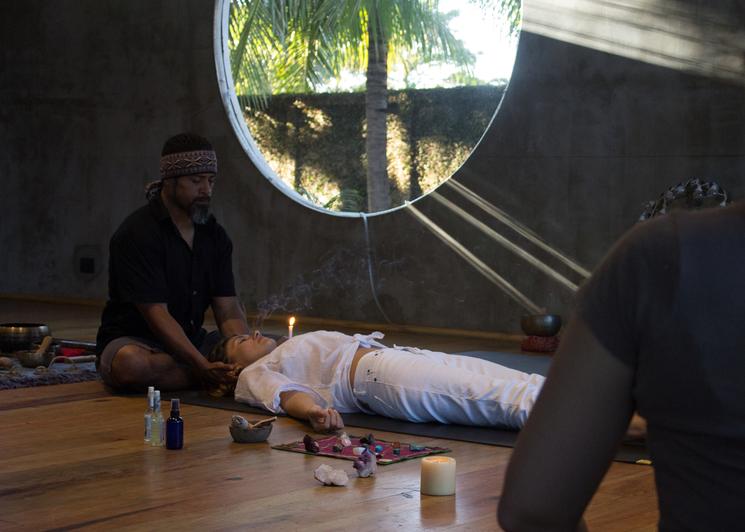 Anthony Alcalde began his journey as a healer and teacher in 1998.  He currently teaches various styles of Yoga at his home in Nicaragua, Peru, and Internationally.  As a yoga, acroyoga instructor, shamanic practitioner and movement educator, he finds balance through giving and receiving.  Thus celebrating the spirit of connection, empowerment and playfulness in his life.  He embodies the beauty of trust through his practice of yoga, acroyoga and meditation.

Anthony is also an accountant, public speaker, and an award winning documentary filmmaker.  From his work you will see his passion for social justice issues and the relationship it has to his country of heritage.  He attended Seton Hall and the University of Utah in pursuit of his B.A. in Accounting.  His film career began in the accounting department for the USA Network, Warner Brothers and the Sundance Film Festival.  Shortly after moving back to New York, he worked as a Production Accountant and Manager for such Networks as E! Entertainment, Style and MTV.

His directing debut was in 2005 with his first short film entitled, "Happy Birthday".  He has since gone on to direct and produce several other projects.  His first feature documentary entitled "BUSCON", dealt with the exploitation of Latin American Baseball players at the hand of the Major Leagues.  It was received well internationally, and won the prestigious Guirlande d'Honneur at its first screening in Milan in 2009.  "BUSCON" went on to screen at various film festivals with the most notable screening being in the Dominican Republic Global Film Festival in 2010.  The screening in Santo Domingo was attended  by then President Leonel Fernandez, government officials and various news outlets.  After the screening a panel discussion was held with Hall of Famer Juan Marichal, Barry Bonds, Sammy Sosa and Pedro Martinez.

Anthony has been spent the past 7 years on an off in the Jungles of Peru working with different tribes.  Most notably the Shipibo, Huni Kuin and Yawanawa.  He add additional support to the commUNITY by providing personal aid and assistance.  In the fall of 2018, Anthony was invited to be a guest speaker at the Amazonia Shamanic Conference held in Puccalpa, Peru.  This special conference was held in honor of the late Maestra Oivia Arèvalo.  This brought together shamans, healers, curanderos and guests from around the world and those interested in healing modalities.

At this time, Anthony Alcalde is happy to currently serve the Nicaraguan and Peruvian communities as he has a strong focus on sharing compassionate and positive communication in his teachings.  His services offer an opportunity to reconnect with your inner light and grow the ability to heal from the inside out. This is exactly the purpose that Anthony sets for his students and classes. For every pose, there is a gentle intention. For every emotion, there is an unbiased connection. He encourages his students to listen to their bodies, find their inner voices, and rewrite any stories that don’t honor their truths.